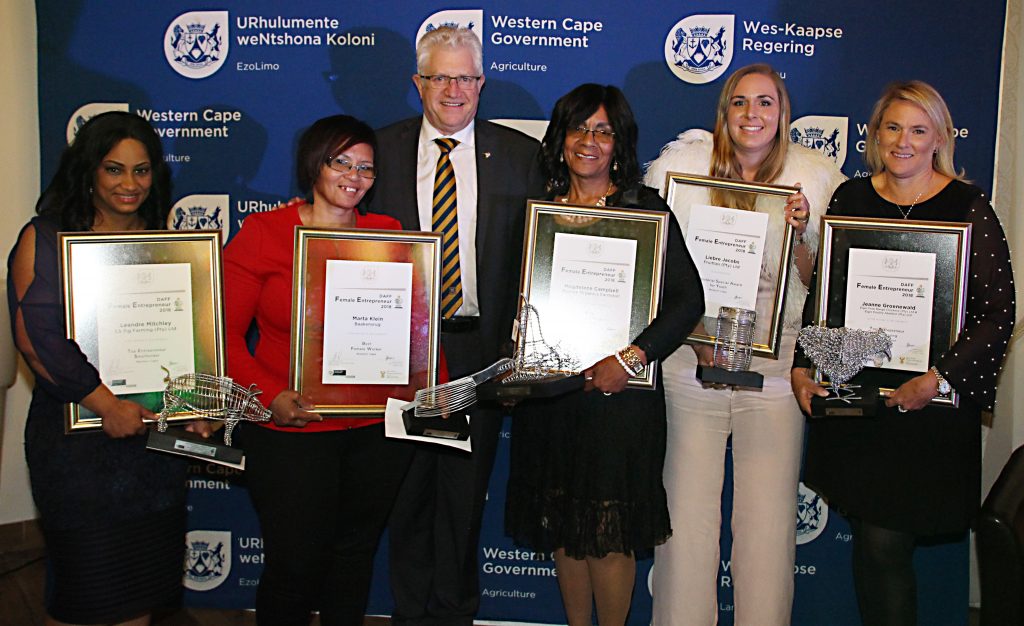 The Western Cape Department of Agriculture held its prize ceremony for the Female Entrepreneur Awards in Stellenbosch last night, honouring the many hard-working women in the sector and the role they play in food security and growing the economy. The competition is a joint effort between the National Department of Agriculture, Forestry and Fisheries (DAFF) and the provincial Department of Agriculture. It seeks to reward the efforts and contribution of women in job creation, economic growth and poverty alleviation. Provincial winners are entered into the national competition to be held on 23 August 2018 in East London where provincial category winners will be competing for the coveted national awards . Minister of Economic Opportunities, Alan Winde said: “This competition serves to recognise the work women are doing in Agriculture, which is historically a male dominated space. It honours the role they play in food security, job creation and bringing foreign exchange into our economy. But more than that, each year as we go through the entries, we as a department are able to identify where the women are, see what they’re doing, and find ways to help nurture them, and help their business grow.”

Situated on the school grounds of the Beacon School for Learners with Special Educational Needs, this garden provides skills training, as well as food for the school, the team’s own consumption and  the surplus is sold to raise funds to invest back into the enterprise, but also to reward volunteers (youth) that assist in the garden. Her future plans are to expand and move into other schools creating more awareness of agriculture to the community. The garden uses organic farming practices and produces many different kinds of fresh vegetables and herbs.

Leandre Mitchley started out with just two pigs, but has grown this to 200- although the road has not been without struggle as she lost about 90 pigs along the way.

Her dream is to turn her business into a commercial facility and to open her own butchery. She is extremely passionate and committed to her enterprise.

Marta Klein grew up on the farm and has lived there her whole life. She was given the opportunity to train as a butcher and meat processor and has excelled in her craft. She has a Code 10 drivers’ license and has many different roles and responsibilities on the farm and has a keen interest in her own development and training and that of her peers.

Liebre Jacobs was the runner up in the processing category and was chosen for the special ministerial award for young entrepreneurs.

Her Piketberg-based business buys third grade fruit and turns it into jams, sauces and chutneys. The business employs 17 permanent staff members, with about 50% of these being youth.